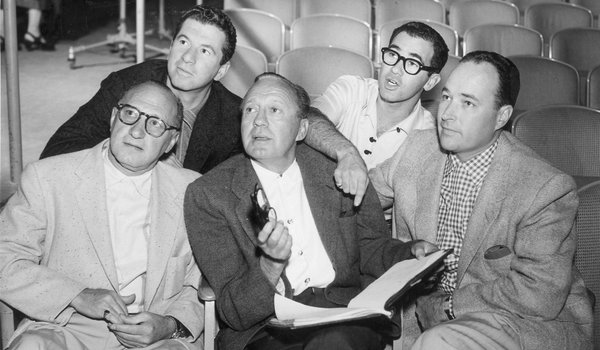 Al Gordon and Hal Goldman joined Jack Benny's writing team in 1950. Jack Benny''s radio show was famously dependent upon his writers, and was quick to give them credit for making him look good. Despite Jack's supposed reputation as a cheap skate, his writers were also some of the best paid in Hollywood.

Benny referred to the "new writers", Gordon and Goldman, even after working together for more than twenty years. Jack brought in the "new writers" while the Program was making the transition to television, but as part of the writing staff, they were involved in the last five years of the radio show.

Gordon was a bombastic and fast thinking writer from the Bronx who never finished high school (joining the Army Air Corp before graduating). Goldman was a more reserved and urbane writer from Minnesota. They teamed with established Benny writers Sam Perrin and George Balzer. The four were nominated for six Emmys with the Jack Benny Program, winning two. Gordon and Goldman earned a reputation for fast and witty writing, sometimes developing skits tailored for guest stars over night.