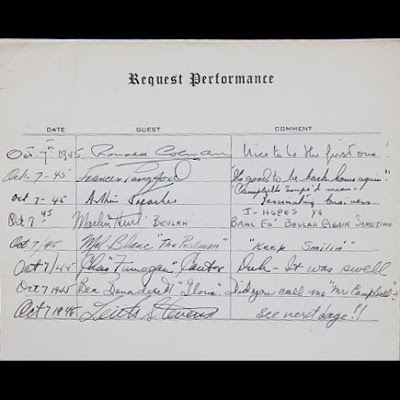 Those of us who enjoy Old Time Radio for its great entertainment value often forget that the programs are also a snapshot of history. The shows themselves, however, aren't the only surviving artifacts from the history of broadcast. A case in point is the Sign-In Log from the program Request Performance . The program was a "civilian version" of the Wartime AFRS program Command Performance . The idea of both programs was that the listeners (troops stationed overseas for  Command Performance , and the general listening public for the post-war version) would write in with requests for specific performers in unique situations. The producers made it no secret that the most original requests would get the most attention. Nonetheless, Command Performance did tend to feature the sound of a lot of starlets marching in combat boots. The Sign-In Log was kept in the studio, and signed by the performers at the end of the live broadcast. The Sign-In Log sheets were l
Post a Comment
Read more
More posts