Showing posts with the label john barrymore
Show all 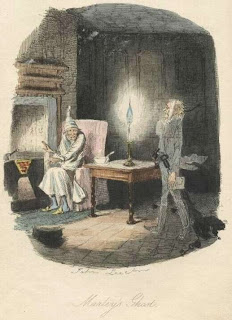 It is almost embarrassing to try to produce an introduction to Charles Dickens ' A Christmas Carol , perhaps the most loved of Christmas stories after the one told in the gospels of Mathew and Luke. Dickens began writing   A Christmas Carol  in the fall of 1843, and completed the story in six weeks; the first edition was released on Dec 17, 1843. Although the author himself made little profit from the book itself, the novella was wildly popular, first in Great Britain, which was experiencing a revival of Christmas traditions at the time, and eventually in the New World, achieving wide circulation by the end of the Civil War . After the initial publication, Dickens returned to the story many times to refine elements of the book. Finally adapted it was for listening rather than reading. Dickens himself read the book in public for the first time in 1852 at the Birmingham Town Hall. But the story would grow beyond Dickens . America has always been noted for quickly ado
Post a Comment
Read more
More posts