Showing posts with the label The Mutual Network
Show all 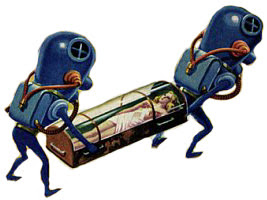 The Mutual Network was in many ways the "little brother" of the Big Four radio networks.  However being small lead to the need to be innovative on many occasions. One example is the world of adult radio Science Fiction . The anthology program  2000 Plus  premiered on Mutual on Mar 15, 1952, nearly a month before  Dimension X  appeared on NBC.  2000+  was unique in that the program used all original stories as opposed to the adaptations featured on  Dimension X   and the later  X Minus One.   S ome of our favorite episodes include: 2000 Plus :  T he Brooklyn Brain , broadcast 6/21/1950.  A young man needs instant wisdom and culture to win his girl, so he volunteers to have scientists give him an electronic brain that will allow him to learn anything instantly. 2000 Plus :    The Green Thing , broadcast 9/27/1950.  A patient in a sanitarium is haunted by dreams of a horrible green monster. The doctors struggle to find what it means when they discover other patients are
Post a Comment
Read more
More posts