Showing posts with the label Frank Lefferts
Show all 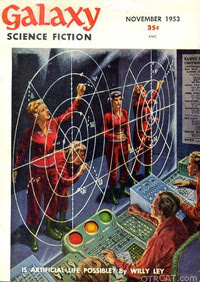 Just as with the Horror Genre , Radio is a superior medium for Science Fiction than TV or Movies. It is not a medium for the lazy Sci Fi fan: the producer couldn't call in the CGI (computer generated image) team and have them created an exploding space cruiser. But for the fan willing to lose himself in his imagination, Radio could make the loneliness of space that much deeper, the burning sands of a distant planet that much bleaker, and the evil of a rogue robot that much more frightening. One of the best Science fiction Anthologies on radio was X Minus One . What made the series great was the stories, which were adapted from the pages of Galaxy Magazine, and later Astounding Science Fiction Magazine. Galaxy had become the leading Science Fiction publisher in the 50's by publishing stories that dealt with social issues and not just technology and monsters. The stories were adapted for radio by NBC staff writers, mostly Ernest Kinoy and Frank Lefferts, who were usually
Post a Comment
Read more
More posts