Showing posts with the label Inner Sanctum Mysteries
Show all

Creeeeak, Welcome to the Inner Sanctum 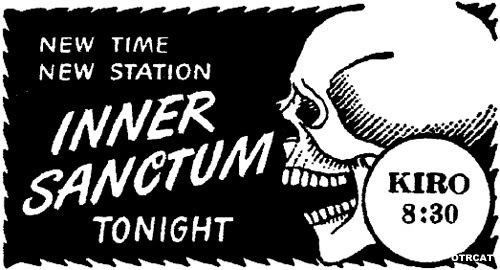 The now famous sound of the creaking door was first heard January 7, 1941 on the Blue network. Creepy sound effects combined with humor set the show apart from contemporary mystery-thriller programs.  Inner Sanctum  was the creation of Himan Brown. Using creepy, yet comical sound effects and banter,  Inner Sanctum  took its listeners to the other side. The other side included going into the minds of lunatic killers, entering into the realm of the supernatural and encounters with ghostly apparitions. In early broadcasts, host Raymond Johnson accompanied by ghastly organ music, opened each episode with a cheesy joke. Johnson’s sarcastic wit and chilling melodramatic voice kept listeners on the edge of their seat in anticipation of the story that was about to be told. Creator Himan Brown was no stranger to radio and he knew exactly how to enthrall an audience. In 1935, he produced the first radio soap opera ,  Marie, Little French Princess . The same year, he also produced  Flash
2 comments
Read more
More posts