Showing posts with the label Ralph Richardson
Show all

The Other, Other Sherlock Holmes 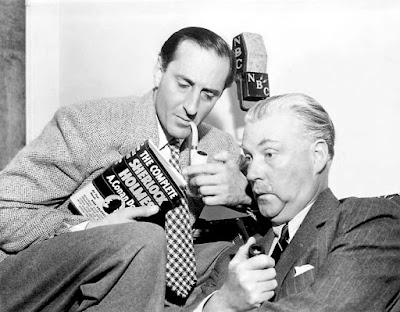 Sherlock Holmes is, without a doubt, one of the world's most famous people who never lived. He is listed in The Guinness Book of World Records as "the most portrayed movie character", having been played by at least 70 actors in more than 200 films. The character was created by Sir Arthur Conan Doyle, a Victorian-era physician who studied medicine at the University of Edinburgh under Dr. Joseph Bell. One of the most influential lessons Bell passed on to his students was the importance of closely observing a patient before rendering a diagnosis. To demonstrate the utility of this practice, Bell would call a stranger into the lecture hall and by observing his manners, clothing, and other factors, deduce the person's occupation. Demonstrating these skills led to Bell being credited as "the Father of Forensic Science". After graduating, Conan Doyle started a practice with a classmate in Plymouth but chaffed at working with a partner. Although he didn'
Post a Comment
Read more
More posts