Solving mysteries was a great way to get noticed during the Golden Age of Radio, and of all the various Radio Sleuths, few were as readily taken to heart as the Teenaged Boy Detective. A classic example is The Hardy Boys, Frank and Joe. The darlings of Bayport are classic American young men, coming from steady, middle-class stock (their father, Fenton Hardy, was a detective in town), had loyal friends and girlfriends, and did okay (but not exceptionally well) at Bayport High. The Boys began solving mysteries in 1927, just as Commercial Radio was taking off.

However, as big as Radio and The Hardy Boys became separately, the Boys from Bayport never made it to the Airwaves. As of 2005, there have been nearly 200 Hardy Boys novels, dozens of spinoff editions and crossovers, comic books, and six different TV adaptations, but nothing on the Radio.

This can be a bit surprising when we consider Radio's insatiable appetite for content. The formulaic manner in which the first Hardy Boys novels were crafted seems ready-made for the creation of an After-school Radio Serial. The novels were a product of the Stratemeyer Syndicate and crafted by a series of ghostwriters under the pen-name Franklin W. Dixon (the first being Leslie McFarlane).

Dark-haired Frank, who is generally eighteen years old in the stories, is in the same high school class as seventeen-year-old Joe. The lighter-haired, more athletic younger brother tends to rush into situations while Frank is more thoughtful, but in most respects, the brothers are reflections of each other. Father Fenton gave them the start in detecting work, and the Hardy men work together on many cases, however, Frank and Joe have no problem getting their school chums in on the fun.

Working conditions at the Stratemeyer Syndicate seem as bleak as the most prolific Radio script factory. The ghostwriters surrendered any future rights to their work, which was typical. Early in the series, ghosts were compensated $125/ completed manuscript, about a two-month wage for a newspaperman of the era. Rates dropped to $100 and then $75 per novel during the Great Depression. Many of the original stories were updated around 1958 to remove the most egregious racial stereotyping. 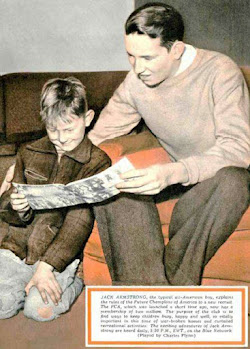 Although the boys from Bayport never made it to Radio, the talking-box would have been welcoming to the Brothers as evidenced by shows like Jack Armstrong the All-American Boy, True Adventures of the Junior G-Men, Terry and the Pirates, Speed Gibson, Hop Harrigan, Jerry at Fair Oaks, Frank Merriwell at Yale, and several others. Like the brothers in the novels, the young men of the Radio embody All-American virtues of steady nerves, respect for their parents, level-headedness, and a thirst for action and adventure.

Most, if not all of the original Hardy Boys Mysteries novels are available from your
favorite audiobook outlets.

Perhaps the biggest loss of not getting The Hardy Boys on the Air is not in the Young Men Solving Mysteries department, but for Young Women doing the same. Seeing the success of the novels, in 1930 the Stratemeyer Syndicate developed the Nancy Drew, penned by ghostwriters using the pen-name Carolyn Keene. There would be occasional crossovers between the series over the years, Joe and Nancy even kissed on a couple of occasions. However, because of the rarity of Girl Detectives, Nancy Drew may be more of a cultural icon than The Hardy Boys.