During the Golden Age of Hollywood, if you were a success you could get away with almost anything. Drinking problem? The studio will send someone to clean up your mess. Does a studio executive take advantage of starlets on the casting couch? Well, a girl has to be willing to do what it takes to get ahead. Have a problem gambling? The mob holds a major stake in the studios, so if you are a big enough Star your debts will simply go away. It was not that Hollywood was above the law, but the studio system was just very good at presenting the best image at all times.

The one thing that was unforgivable in the Golden Age of Hollywood was "sexual deviancy", especially for a man to be romantically involved with another man. There were rumors of lesbian "sewing circles" in and around the showbiz community; while not acceptable behavior, 'sewing circle friends' would not face the level of persecution heaped upon a homosexual male whose 'proclivities' were made public.

In 2009, Applause Publications released Michael Seth Starr's Hiding in Plain Sight: The Secret Life of Raymond Burr. In the book, Starr makes a rather compelling case that Raymond Burr, one of the biggest talents in Old Time Radio and well known for his portrayal of Perry Mason on TV for nearly four decades, was, in fact, a deeply closeted homosexual. According to all the facts we can verify, Burr was a hardworking and incredibly talented actor, a dedicated philanthropist, a supporter of US Troops serving overseas, and by all indications someone who lived a happy and admirable life. 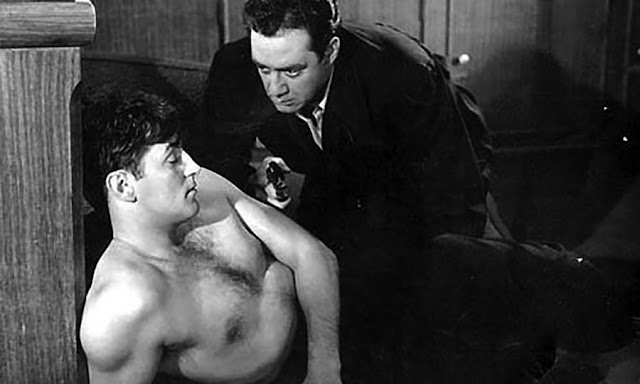 Was he gay? Although there is plenty of evidence to indicate that he may have been, we believe the only definitive proof of homosexuality is for the subject in question to "come out", which Burr never did. And if it was something he chose not to share with his fans, it is none of our business.

Raymond William Stacy Burr was born in New West Minster, British Columbia, Canada, 1917, his father a hardware salesman and his mother a piano and music teacher. When Burr was six, his parents split up, his mother moving to Vallejo, California, while his father stayed in New Westminster. Burr stated that he weighed twelve-and-a-half pounds at birth and struggled with his weight his entire life. Nonetheless, he told stories that indicate that he had a happy childhood. When he was twelve, his mother sent him to New Mexico to spend a season working on a ranch. Because of his size, a group of college kids there assumed he was older than he in fact was and exposed him to some adult situations which he was not yet mature enough to deal with.

Young Raymond learned to love growing things and spent some time working with the Civilian Conservation Corps. He discovered acting as a teen and tried to get into the Pasadena Playhouse but could not afford the tuition. In 1934, Burr joined a repertory company which toured throughout Canada and moved on to another company which toured India, Australia, and England. He returned to California to attend Long Beach Junior College, acting on a local radio station at night, and was finally able to join the Pasadena Playhouse in 1937. In 1940, he moved to New York to try his luck on Broadway, found some work, but returned to the Pasadena Playhouse in November 1942 for his first starring role in 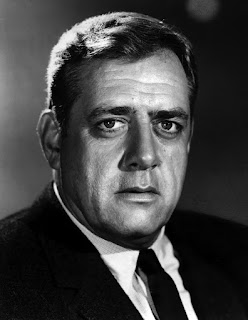 Quiet Wedding. He was asked to join the Playhouse faculty and returned to Broadway to appear in The Duke in the Darkness (1942, Playhouse Theatre, 24 performances). He returned to California with a contract with RKO Radio Pictures.

Burr would be featured in more than 50 pictures between 1946 and 1957, most often as the villain in film noir projects. He later stated in an interview that, "I split the heavy parts with Bill Conrad. We were both in our twenties playing much older men. I never got the girl but I once got the gorilla in a 3-D picture called Gorilla at Large. I menaced Claudette Colbert, Lizabeth Scott, Paulette Goddard, Anne Baxter, Barbara Stanwyck. Those girls would take one look at me and scream and can you blame them?"

Both weighing in at more than 300 lbs, both Burr and Conrad had, as they say in the film industry, the looks for radio. Burr appeared regularly on Jack Webb's first network radio show, Pat Novak For Hire, and played Sgt Joe Friday's boss, Ed Backstrand, in the early seasons of Dragnet. He was a popular actor on the West Coast "Radio Row" and when CBS TV "stole" Gunsmoke from creators Norman Macdonnell and John Meston, they produced a new "Grown Up Western" about a Calvary Post and its troops called Fort Laramie starring Burr as Captain Lee Quince.

A few critics have claimed that Fort Laramie was an even better radio drama than Gunsmoke. With the Korean Conflict still fresh in the public consciousness and US involvement in Vietnam just beginning, the program's themes of duty for a professional military man fighting in an unpopular war was incredibly timely. CBS TV had a strong hand in killing this radio project as well but in a less nefarious way. Raymond Burr was about to move on to bigger things, like starring in TV's Perry Mason, making the defense attorney one of the most popular TV characters of all time.

There are a number of inconsistencies in Burr's biography which would potentially point to a scandal of some sort, perhaps even fabrications to protect a closeted homosexual. Burr claimed to have been married at the beginning of

WWII to Scottish actress Annette Sutherland who was killed in an airplane crash. This marriage supposedly resulted in a son, Michael Evan, who died of leukemia when he was ten years old in 1953. There are stories of another marriage in the early fifties to actress Laura Morgan who also died of cancer. No records of either marriage or the birth and death of a son are known to exist. 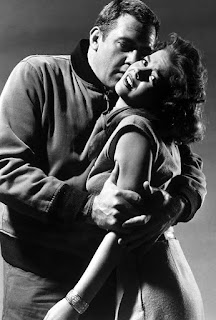 Burr's obituary claimed that he served in the Navy beginning in 1944 and he had been injured at Okinawa. No records of his enlistment, service, or discharge have been found. When The Duke in Darkness closed in 1944, Burr weighed around 350 pounds, so it seems unlikely that he would have been accepted for enlistment by the Navy.

A few falsehoods in a studio publicity packet is far from being an uncommon occurrence. Raymond Burr did marry one of his students from the Pasadena Playhouse, Isabella Ward, on January 10, 1948. They split a few months later and were divorced in 1952. In 1957, Raymond met a young actor on the Perry Mason set named Robert Benevides. They struck up what appeared to be a close friendship, although Benevides was 13 years younger than Burr. Soon, the young actor became Burr's assistant and later was listed as a business partner. Raymond was interested in orchid breeding and their company, Sea God Nurseries, had an international presence with properties in Fiji, Hawaii, the Azores, and Southern California (the "Barbara Hale Orchid" was named for Burr's Perry Mason costar).

Burr became the highest-paid actor in television by the time Perry Mason went off the air, and he made some shrewd business and real estate investments to become a very wealthy man. However, he claimed to have picked up a philosophy from Errol Flynn that if he had $10 in his pocket when he died, he hadn't done a good job. He gave huge amounts of money (including his salary from the 30 Perry Mason TV movies from 1985-95. His causes included Save the Children, and he sponsored 26 foster children, many with serious medical needs. The USO as another favorite cause and he made several tours to entertain troops overseas. Several of these tours were with a troupe he recruited and funded with his personal money. He made it a point to visit out of the way posts that were not regularly served by the USO, although he made high profile tours of both Korea and Vietnam in wartime. 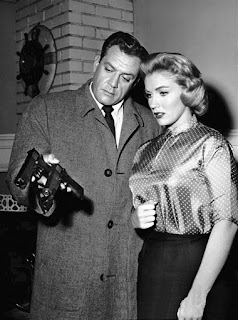 In the spring of 1993, Raymond Burr was diagnosed with inoperable cancer which had spread to his liver. He threw several "Goodbye parties" before succumbing at his ranch in Sonoma County, California, on September 12, 1993. Burr left his entire estate to Robert Benevides to the exclusion of relatives, including a sister and several nieces and nephews. The will was contested but the estate went to Benevides, whose attorney stated that the value of the estate was nowhere near the $32 million estimated by the tabloids.

Was Raymond Burr gay? The "truth" was supposedly an open secret in Hollywood, and we have tried to present the evidence as impartially as possible. However, we have endeavored to not pass judgement, either way, for several reasons. Most of all, Raymond Burr chose to not "come out", which is the only acceptable proof of homosexuality, even above being caught in flagrante delicto in a homosexual act.

An accusation of homosexuality only serves to tarnish the memory of a great actor and a good man. A Star on the Hollywood Walk of Fame at 6656 Hollywood Blvd is dedicated honoring Raymond Burr's contributions to Television.