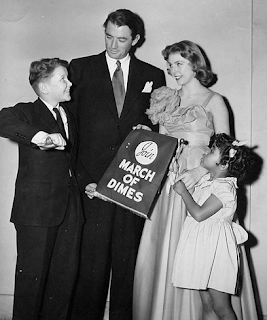 
The March of Dimes was also known by its original formal name, The National Foundation For Infantile Paralysis. Infantile Paralysis is better known by the name polio, and even that has become largely unrecognized, thanks to the efforts of the March Of Dimes.

The virus that causes polio was identified in 1908, and by 1910, the number of identified cases of the disease began to reach epidemic proportions. The "Great Race" was on to find a vaccine for the disease, but progress was slow. In 1921, future President, Franklin Delano Roosevelt, was diagnosed with the disease. After he became President, Roosevelt founded the National Foundation.

The term, March of Dimes, referred to the organization’s early annual fund raising effort. The name was actually coined by Eddie Cantor, who was spoofing the popular March of Dimes newsreels.

Enjoying the support of a popular President, and doing such important work, The  March of Dimes  has always enjoyed popular support in fund raising. Radio was certainly an important part of the effort. This small collection, from the early 1950's is from a period when the organizations success was at hand. In 1955, the vaccine developed by Dr Jonas Salk was approved, and eventual eradication of polio became possible.
The March of Dimes has faced some criticism for not disbanding once its goals were met. Others have seen the charity as an effective organization that was already in place that could continue to do good works. The March of Dimes continues to fund research and other programs to fight birth defects.
march of dimes radio broadcasts the crippler