Morning Music... Another Start to A Good Day for The Listeners of Old Time Radio 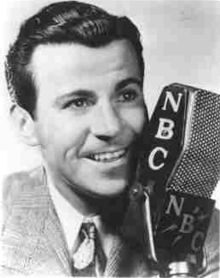 Ah, the melodious voice of a Dennis Day, or Doris for that matter, in the breaking hours of the day. This is what met many American folks as they sat down for their pancakes, eggs and coffee on the radio in the 1940’s and 1950’s. The major broadcasters out of Hollywood, Chicago and New York presented such a varied repertoire of soothing crooning and spiritual hymns, that listeners were becoming enthralled with their favorites. The breakfast genre of old time radio did more than fill a segment of the day faithful followers...it was a necessity to crack the blues and the doldrums.

Whether it was Tex McCrary or Tex Ritter, country music played a major part of early morning radio. The sounds of the Grand Ole Opry did more to educate the masses on what fiddles and Gee’tars could do to stomp out the blues of Americans as they began the race to their 9-5 work day. Of the many forms of melody and verse that greeted millions of people, none had the ability to conquer a day like country music could do. Patsy Cline might have “Gone walking After Midnight”, but the rest of the country had no problem with waiting until the sun broke the horizon to catch their melodies.

Of course, we cannot forget classical sonatas and orchestras that permeated many a home. The more sophisticated taste desired the light vibrato of a violin or the deep percussion to have with their morning food fare. Sometimes all folks wanted early in the morning was instrumental over vocals to convene their days.


It did not matter what harmony or hymn was being aired to America’s kitchens. People simply desired to start their day with a song in their heart and on their lips.
breakfast radio recordings Dennis Day Doris Day tex mccrary tex ritter waking up to radio