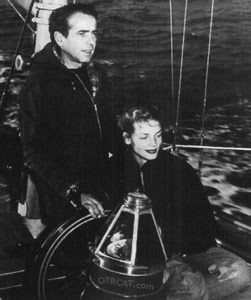 It had been a few very good years for Humphrey Bogart. With the success of The Maltese Falcon and Casablanca, Warner Bros was finally letting the actor loose to explore his versatility. Bogie was incredibly dedicated to his craft; in over 80 films he never arrived late to the set or unprepared with his lines. Unfortunately he was in an unhappy marriage with a woman he cared deeply for.

The final tipping point for the "battling Bogart's" came when production began on his 1944 project, and adaptation of Hemingway's To Have And Have Not. The female lead was given to a sultry model from Harper's Bazaar named Betty Perske. Betty took the stage name Lauren Bacall, and after Bogie saw her screen test he told her "We're going to have a lot of fun together." 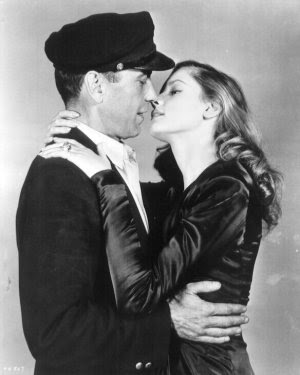 To Have And Have Not was the story of an American drifter running a charter boat service in the Caribbean, facing forces that are greater than he is while remaining true to his ideals and the people he cares about.

The chemistry between Bogie and Betty on screen was carried on in real life. Betty's confidence and work ethic matched Bogie's, and her warmth and nurturing manner brought out his best qualities. It was the push he needed to end a bad marriage, and start a new family.

Bogie and Bacall were open to a venture, and that was old time radio syndication in the form of a series titled "Bold Venture". From an informal recording studio, they could do a radio series in a few months and have it syndicated over time by the Frederic W. Ziv Company. With Bacall, it was a package deal that was worthy of Slate Shannon, Bogie's alter ego in this series. Shannon is the owner and proprietor of a dubious Havana hotel, and Bacall is Sailor Duval, his sultry, wisecracking sidekick, whose exact status is questionable. Jester Hairston plays the calypso-singing aide-de-camp King Moses, whose witty rhymes comment on the plot as it whips along. Shannon's hotel attracts cutthroats, gamblers, and other denizens of the deep to its nautical watering hole, so Shannon is ready to do what it takes to keep the peace, or get a piece of the action.

As on the radio Humphrey Bogart was a well-known sea-dog in real life who liked to get away from it all by boat in order to fish and make bottles empty for messages. This show is like a fun-house mirror of real life (and reel life), with the requisite toughs, quips and plots as knotted as ropes on a well-used dock. Music by the stalwart David Rose adds to a quality cast of Hollywood radio talent.

Bold Venture may not be all that bold in terms of the history of radio adventure, but for Bogie and Bacall, it was a venture that promised easy treasure for minimum digging. By the time it went into radio syndication, Bogie was in Africa working with another beauty on another boat called "The African Queen."