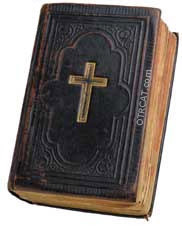 A working definition of Christian Missionary work is "One who is to witness across cultures." The term Missionary comes from the Latin term missionem, "to send forth". Many churches have sent their representatives out into the world to spread their message and to do good works in the name of the church. Radio has always been a valuable missionary tool.

There is anecdotal evidence that radio sets came into the homes of many Fibber McGee and Molly, Buck Rogers, and Suspense! fans so that a senior member of the family could enjoy the gospel music and sermons of a favorite radio preacher. And in many cases these religious were very entertaining, although there are cases where the spiritual leaders found themselves embroiled in scandal. It is not the purpose of this article to pass judgment on these scandals, but merely to report where appropriate.

The Catholic Hour became part of the NBC line-up in 1936 with the cooperation of the National Council of Catholic Men. The program remained on the radio at least through 19477, and made the transition to TV. Choral music in both Latin and English was featured along with heavy topics like communism, the role of Catholicism in government, and racism. Father Charles Edward Coughlin began broadcasting in 1926 in protest of Ku Klux Klan cross burnings in the Detroit area, and his broadcasts were popular enough to lay the foundations of a weekly show. He stuck mostly to religious topics until the beginnings of the Great Depression, when he became more political, speaking out against communism and socialism. He was a supporter of FDR in the 1932 Presidential race, and an early proponent of New Deal programs, although he turned away from the President in 1934 towards a more conservative agenda. This, along with a growing perception of antisemitism caused Father Coughlin to fall from favor with the Church, the administration, broadcasters, and listeners.
The long running Eternal Light, produced with the cooperation the Jewish Theological Seminary, a center for conservative Judaism, ran as part of NBC's Sunday line up from 1944 though 1989. The program featured often lofty prose, and was incredibly successful at its two part mission; outreach to its Jewish audience and fostering tolerance of Jews among the Gentiles. Although the message was Talmudic in origin, the lessons were universal. 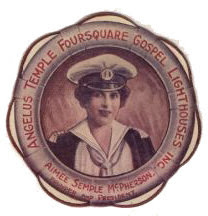 Aimee Semple McPherson was an incredibly popular evangelist and media personality in the 1920s and 30s. Her mother had been active in the Salvation Army, which gave Aimee her first exposure to religion She left on an evangelistic tour with her first husband soon after their marriage, but they both contracted malaria in China, costing Robert Semple his life. The couples daughter was born soon after, and mother and daughter returned to the US. Aimee soon left on a tour of the Southern US, preaching from the back seat of a 1912 Packard convertible. Eventually she landed in Los Angeles, which was a popular tourist destination in the years after WWI. She settled there, and began preaching in large auditoriums, eventually building her own "mega church". Although she claimed to have disdain for Hollywood, she often made use of Hollywood style theatrics and sets in her Angelus Temple church, home of the International Church of the Foursquare Gospel. In the early 1920s the church launched radio station KFSG, and Aimee became one of the first women to preach on the air. In 1926 she was the supposed victim of a kidnapping, but this was met with a great deal of skepticism, as Aimee showed few ill effects for her supposed ordeal. Theories about her month long disappearance ran from a rendezvous with a married lover or a clandestine abortion, to plastic surgery or a publicity stunt. 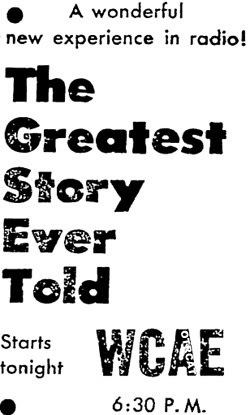 Journalist and editor Fulton Oursler had been a declared agnostic since his teen years, but became interested in religion after a visit to the Holy Land with his wife and children in 1935. This interest was further awakened by the growing specter of Nazism and Communism. Oursler determined to write a series of stories about the life of Jesus, The Greatest Story Ever Told, that were later developed into a radio series that ran from 1947 through 1956. Oursler used some of the stories related in the radio series for a novel of the same name, published in 1949. The novel would be the basis of the epic 1965 film of the same name.