Showing posts from January, 2014
Show all

Who was Radio's Sherlock Holmes? 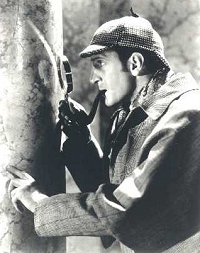 When radio's Sherlock Holmes dug into the case at hand, he was as obsessed as a hound-dog on the trail of the scent and as determined as a shark heading towards its quarry. Holmes stuck to it until all possible avenues had been traced. He was a detective’s detective. So what...or rather who created this paragon of detail and pursuit? As a doctor and writer, Sir Doyle prescribed (like that?) his character of  Sherlock Holmes  to stay committed to the task at hand...and find the answer. The unique aspect of England’s leading private detective was he found answers where no one even noticed...or dained to perceive a clue. Holmes was a complex mind that harbored cliches for clues and eloquence for action. The radio audience became entranced by Holmes ability to locate the thread in the bizarre location and the drop of wine that “should not have been there”. America developed a following for the non-Tarzan who was as quick with the wit as he was the reveal of the potential cold-case
1 comment
Read more
More posts