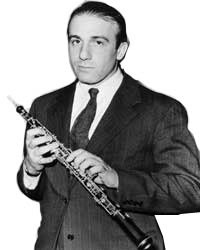 Mitch Miller (1911 - 2010) Radio and music fans mourn the loss of producer, host, and musician Mitch Miller .  Best known for hosting the television show, Sing Along with Mitch , he donned a mock turtleneck and convinced TV audiences to get down with the chart toppers of the day.  Mitch Miller had his hand in the career of many great music stars including Frank Sinatra , Rosemary Clooney, Tony Bennett, Doris Day , Patti Page, Guy Mitchell, Dinah Shore , and more.  However before his role as music producer, he performed as Mitch Miller and his Orchestra.  Below is a  rare recordings of the Mitch Miller Show from 1961, free to enjoy: The Mitch Miller Show: Guest Starring Jonathan Winters" (July 15, 1961)
Post a Comment
Read more